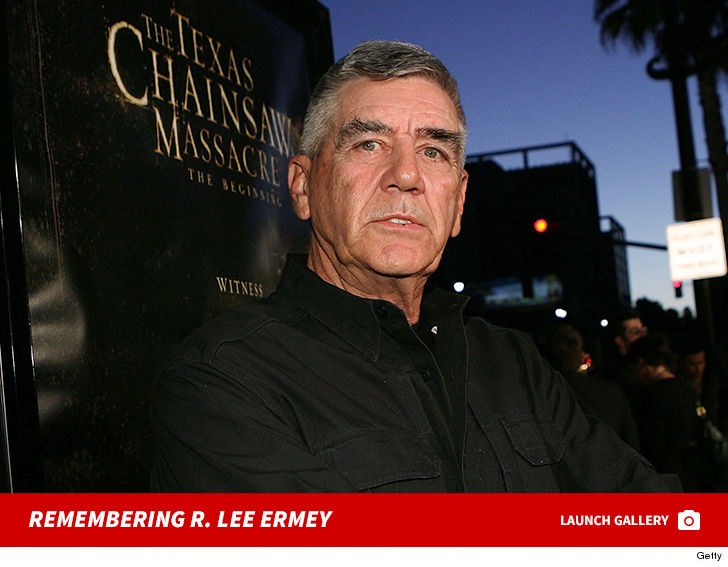 Ermey appeared in more than 70 films.  He once said, “I’ve done over 200 episodes of [GunnyTime], and then [Hollywood] found out I’m a conservative.”  He says he was blackballed from Hollywood over his political views.  He says he was actually an independent and voted for Barack Obama in 2008 but soured on him.  He was also a board member of the National Rifle Association.

He said not too long ago, “Do you realize I have not done a movie in five to six years?  Why?  Because I was totally blackballed by the … liberals in Hollywood.  They can destroy you.  They’re hateful people.”

The actor enlisted in the Marine Corp at 17 and served in Vietnam.

He was a consultant for the classic, “Apocalypse Now,” and also played a helicopter pilot.

Viola Davis‘ husband says they’ve made necessary adjustments after their home was almost broken into last month, but it sounds like he was already prepared to defend his family.

We got Julius Tennon Saturday at LAX, and asked about a recent attempted break-in at his and Viola’s home … during which they were home and fast asleep in their bedroom.

Julius says he was able to scare off the prowlers with his “Lion King” voice, and that he and V got rid of the ladder the dudes used to climb up to their second-floor balcony.

Then he drops an ominous warning for anyone considering to pull something like that again … DON’T, ’cause he’s got something more lethal than his voice. Guns, perhaps? You tell us.

Azealia BanksClaims She was ‘Lowkey’ Raped …On Since-Deleted IG Posts 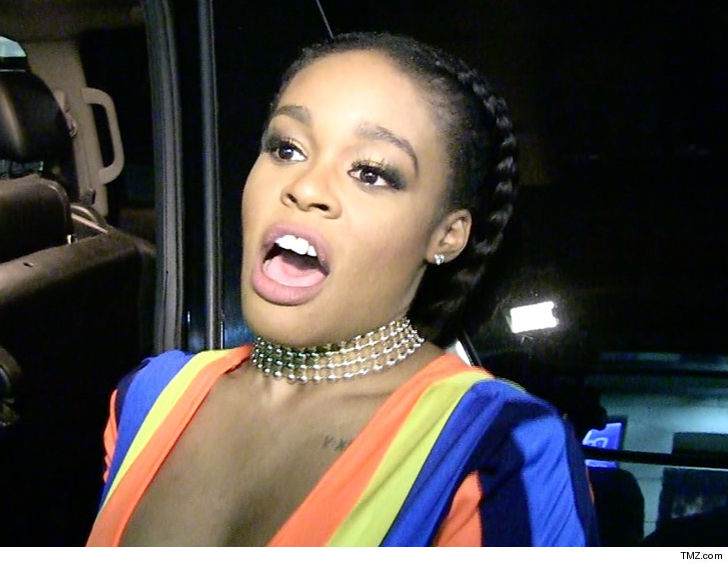 Azealia Banks was breaking down and sobbing on her Instagram story Saturday night, claiming she’d been sexually assaulted … and threatening to quit music over it.

In since-deleted Instagram videos posted to the NYC rapper’s Story, Azealia can be heard crying over being “low key” raped by a man she claims pressured her into sex.

In the posts — which were captured by a third party and posted online — she starts off with a disclaimer saying she fells “like dirt.” She also partially blames herself for the alleged rape, and goes on to threaten deleting her social media accounts until she’s okay again.

Azealia was clearly affected by the incident — the details of which are left ambiguous for now. She doesn’t say where this happened, but presumably it occurred Saturday night. She also doesn’t name the alleged perpetrator.

You never see her face … only her voice, which at one point says someone “got the best of me.” She eventually asks someone to come pick her up — but the posts were later deleted off her account. She did, however, allude to roofies in later posts … and added she was “good” from the night before and that her show on Sunday was still on. 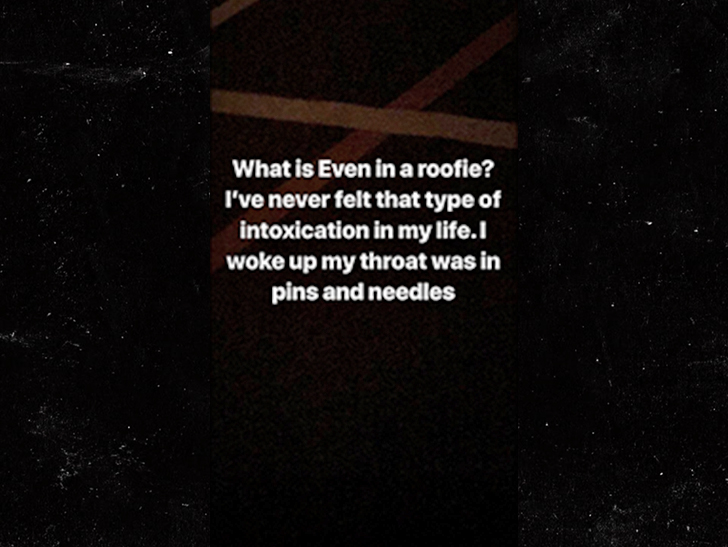 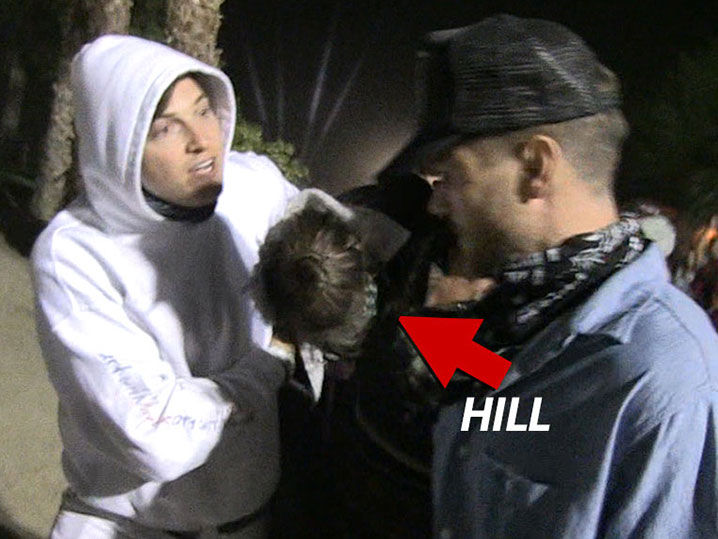 Victoria’s Secret Angel Taylor Hill might have had a little too much fun for Day 2 of Coachella, ’cause she had to be carried out by a group of friends by the end of it.

We got the model Saturday heading into the Empire Polo Club for round two of the festivities, where she was trying to be incognito — but appeared perked up and fully engaged with our camera guy … making her love for Beyonce loud and clear.

Then we saw her again as she was leaving with what the same group of friends — only this time she was being held up as her head was hanging and she stumbled to the car.

It sounds like an ambulance was being considered briefly, but her pals ended up getting her into the car safely where she appeared to be conscious and okay. 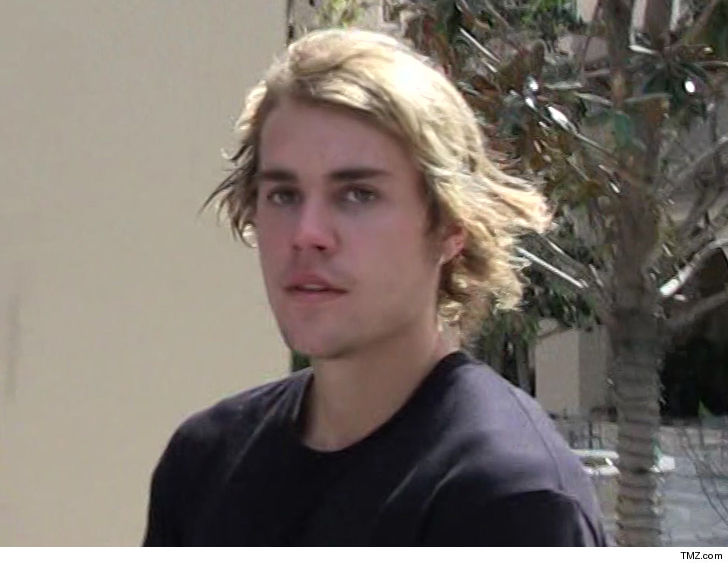 Justin Bieber punched a guy in the face and threw him against a wall after the man grabbed a woman by the throat at a Coachella party, and would not release his grip on her … TMZ has learned.

Sources familiar with the situation tell us Justin and a friend showed up at a party Saturday being attended by Patrick Schwarzenneger. Justin was talking to some people when a guy walked in, spotted a woman … and went ballistic. Sources at the party say he appeared to be on drugs — and it looked as if the woman may have been his ex-GF.

We’re told the guy suddenly grabbed the woman by the throat and would not release her. Justin and his friend started screaming at the guy to let her go, but he only screamed back “Go f*** yourself” … maintaining his grip. At that point, Justin hit the man in the face and pushed him against the wall … allowing the woman to break free.

We’re told the guy was thrown out of the party and a short time later, was chasing an SUV … apparently believing Justin was inside. He was screaming Justin’s name as he began hitting the vehicle. We’re told cops eventually came and arrested him. 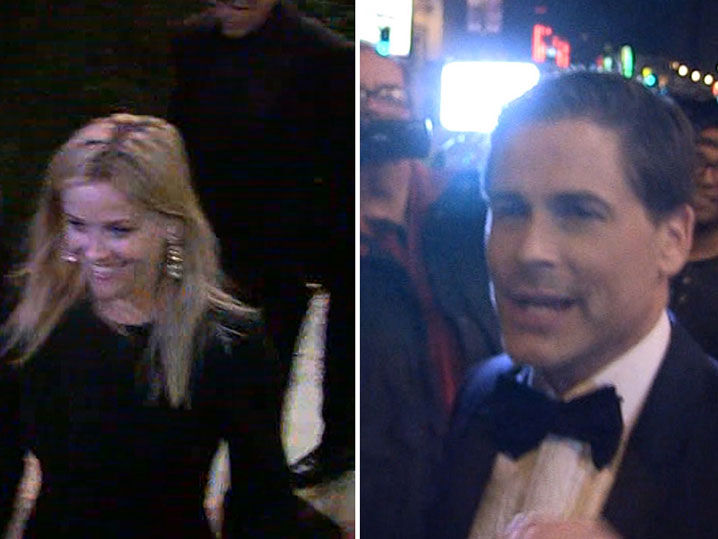 Do not doubt Gwyneth Paltrow‘s far reaching star power, ’cause she drummed up some the biggest names in Hollywood for what may have been practice for her forthcoming nuptials.

Tons of A-list actors and actresses poured out of the Los Angeles Theatre in Downtown L.A. Saturday night for an event many are calling Gwyneth’s and her fiance Brad Falchuk‘s wedding rehearsal. They all got grilled, but no one copped to what was going on inside.

Still, it was awesome seeing a lot of the most famous stars of the past two decades together in one building — Reese Witherspoon, Steven Spielberg, Julia Roberts, Jennifer Aniston, Demi Moore, Cameron Diaz, Rob Lowe, Jon Favreau, and more were spotted leaving Gwyneth’s rumored run-through … and they were all smiles. Bodes well for wedding day!

As we reported … Gwyneth got engaged to be married again this past January, splashing the news on the front cover of her Goop issue that month.

This will be the second marriage for both Gwyneth and Brad. She was married to Chris Martin — with whom she’s well known for consciously uncoupling — and started dating Brad before her divorce with Chris was finalized in 2016. 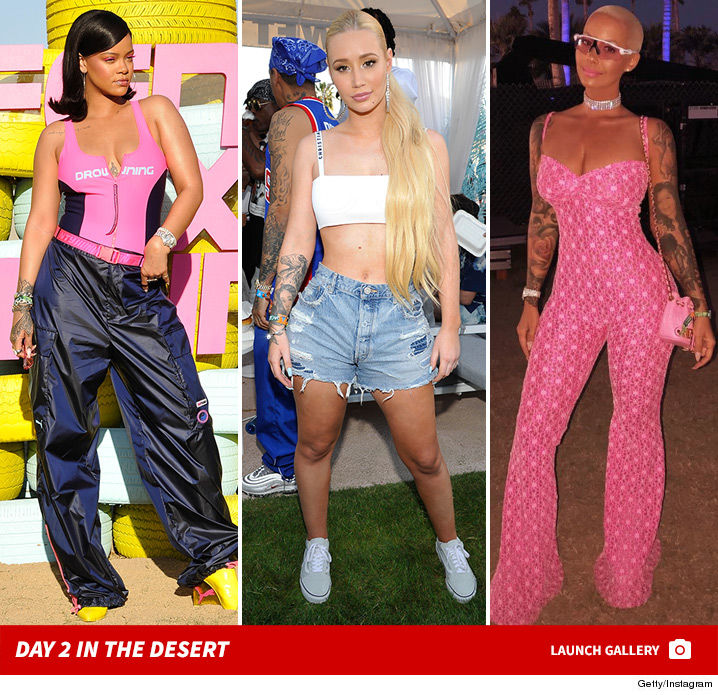 Another day at Coachella … another slew of celebs showing up and showing off their hottest desert styles.

Queen B headlined Saturday night — a long anticipated gig after having to bail last year — and floored the Coachella crowd. Next up for Sunday … Eminem!!! 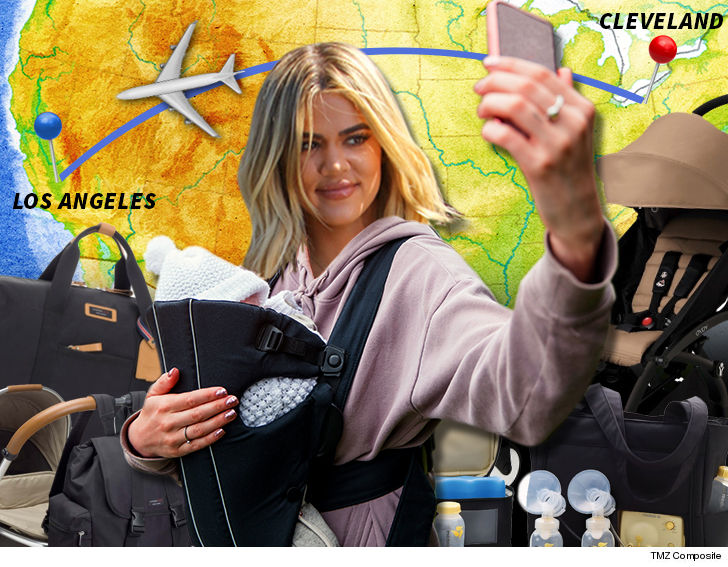 Khloe Kardashian leads a busy lifestyle, so she’s making sure her first child is equipped to be a baby-on-the-go as well … TMZ has learned.

We’re told in the week leading up to Khloe giving birth, she was stocking up on items for the baby, but panicked when she realized she was low on luggage and other travel items for her daughter.

Our sources say she loaded up with about 20 items from Bev Hills baby boutique Petit Tresor — it’s a fave stop for the Kardashians. We’re told Khloe dropped just under $4,000 to get a BabyZen Yoyo Travel Stroller, a Medela Pump On-The-Go Station, and a Storksak Travel Diaper Bag … to name a few gems off her list. 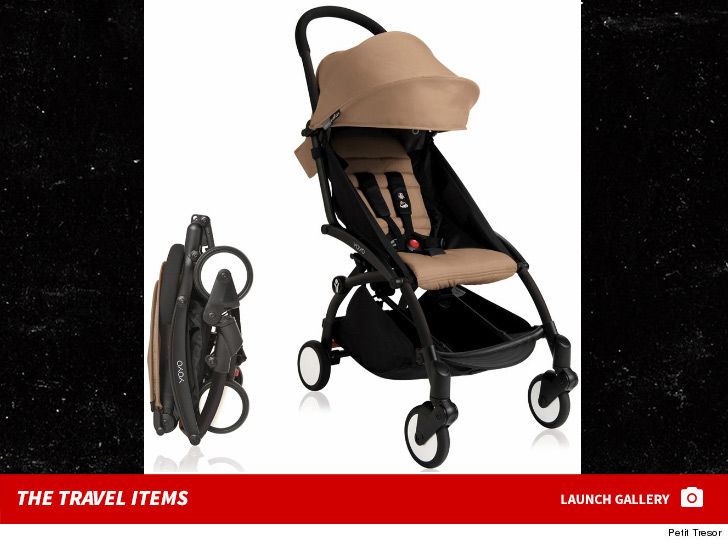 It’s interesting — at the time of her purchase, we’re told Khloe was anticipating a lot of back and forth trips from L.A. to Cleveland to be with her boyfriend and baby daddy, Tristan Thompson.

Those plans may be changing now, but Khloe’s baby girl will still be ready to see the world. 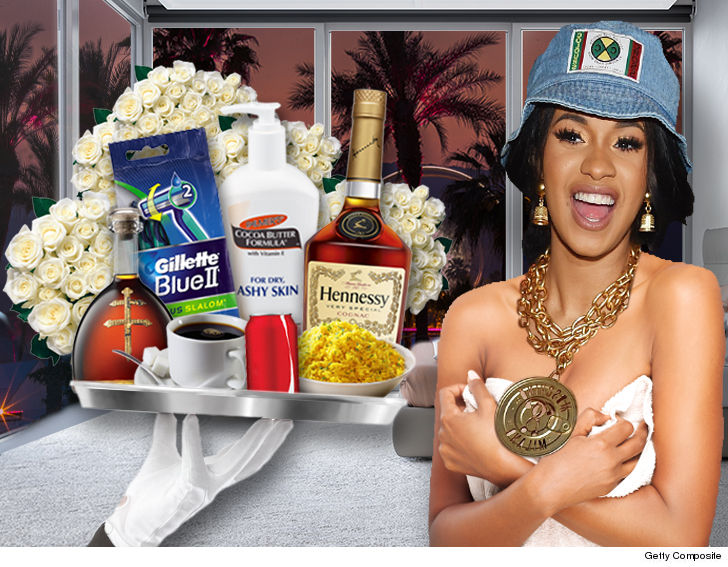 When Cardi B performs the biggest show of her life at Coachella, her pregnancy won’t make the scene backstage any less of a rager … at least for her entourage.

We got a hold of Cardi’s rider and it’s stocked, at first glance, with several things a pregnant woman shouldn’t be consuming … but also several preggo-friendly options. Here are some highlights:

We’re told Cardi, who is due the first week of July, will obviously not be indulging in the booze … ditto for Red Bull and coffee. All that stuff is for her hard-working team.

The roses are 100 percent for the boss lady, though. Let’s face it, Cardi’s getting used to that sweet smell of success. 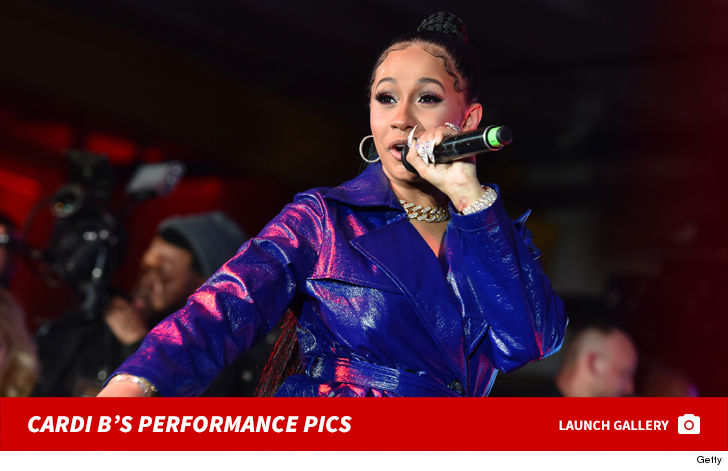 Scott hangs with rappers like Quavo and Future, and we’re told they inspired him to link up with Icebox Diamonds & Watches in Atlanta to get his own custom piece.

We’re told Scott was thrilled with the final product. He better be after spending quarter of a mil! 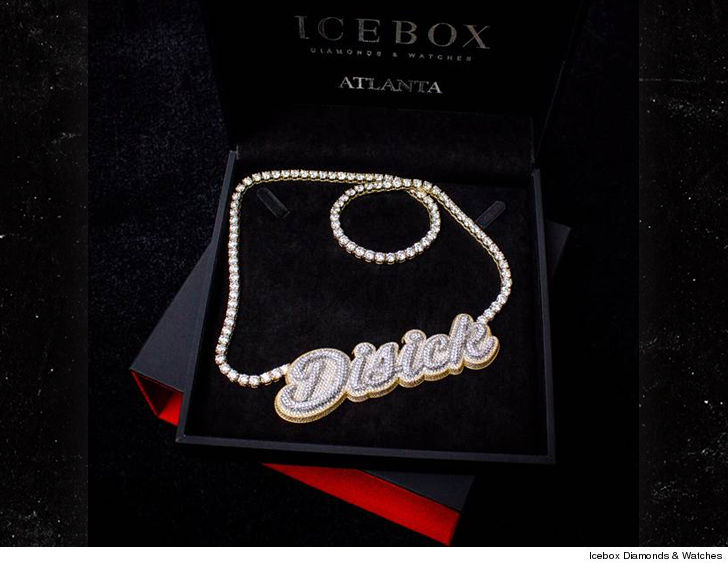